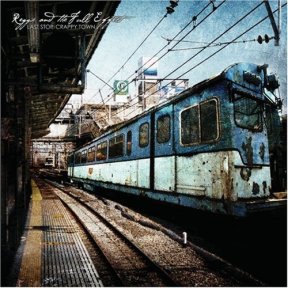 I’ve been listening to Reggie and the Full Effect for I don’t know how many years now and this is the first album that excluded the alternate bands FLUXATION and Common Denominator. Those side bands add such variety and strangeness to Reggie’s albums you’d think it would be extremely noticeable if they were gone. Honestly I didn’t even notice they were missing on Last Stop: Crappy Town until I starting reading reviews. This is a much darker record than most listeners and fans might be used too. To me, there wasn’t any lighthearted lyrics and looking back to ‘ Songs Not To Get Married To‘  where, James Dewees, the lead singer and creator of the band was dealing with his divorce, that this band was capable of touching on more serious subjects. Dewees had mentioned that this record reflected his time going to rehab (hence the names of the tracks, which are all stops the F train made on his way to treatment). I can understand why fans might not enjoy this album, viewing this album in context of what Dewees was going though, however (and that he’s an amazing musician and performer), I’d urge anyone to give this full cd a listen.

This entry was posted in Music and tagged common denominator, fluxation, james dewees, last stop crappy town, monthly music, Music, paco, reggie, reggie and the full effect, songs not to get married to, tacos, the get up kids, vagrant. Bookmark the permalink.

One response to “Monthly Music – Reggie and The Full Effect”